The late Madeleine L’Engle made the following wry observation with respect to her writing, and I can’t help but agree with her initial premise, though not always the second:

“You have to write the book that wants to be written. And if the book will be too difficult for grown-ups, then you write it for children.” 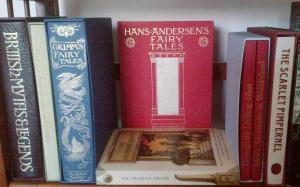 The best books for children and teens—those that become classics—often possess the same appeal for adults as they do for younger readers. The Chronicles of Narnia by C.S. Lewis, The Lord of the Rings by J.R.R. Tolkien, and J.K. Rowling’s Harry Potter series have maintained their popularity over years, and even decades. I suspect the number of readers worldwide who first discovered these tales as adults, would rival the accumulated numbers of children and young people who came to them during their pre-teen and teen years. I remember reading such titles as David Copperfield, Grimm’s Fairytales, The Arabian Nights, and even Agatha Christie mysteries when I was around the age of ten or eleven. No one ever told me that one or more of them might be inappropriate for me or beyond my reading level. If I didn’t understand a word right away, I would soon pick up the meaning from the context, as most children will do over time. Thank goodness there was no such thing as “controlled vocabulary” or designated reading levels in those days. (I might have had fewer nightmares, though, if I’d stuck with the Nancy Drew and Hardy Boys series!) 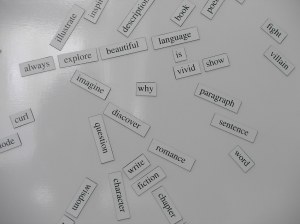 But to get back to answering my original question, I would have to say that the phrase “playing with words” has nothing to do with the targeted age of the reader, and everything to do with freeing the creative mind. The makers of magnetic words that can be arranged into a poem on the side of a fridge understood that concept perfectly—and made money from it at the same time.

I still remember a day from my childhood when my sister and I spontaneously created a new form of entertainment to amuse ourselves. We were both curled up with a book at the opposite ends of a sofa. I don’t know what got us started, but we began to take turns at reading a sentence aloud from the page we each had open before us. The results were belly aching hilarious at times, or even uncanny in the way the sentences would sometimes relate to one another, so much so that a totally different plot from those of the original texts would sometimes develop like invisible ink becoming visible on a page. You could say we’d been “playing with words”—the words of published authors. (Whether they would have approved of that, or not, is another matter!)

Years ago, when the writers’ group I belong to–Inklinks–gathered for the first time, one of our members mentioned having read a book entitled The Empty Box, a collection of stories by well-known authors, all of whom had been invited to write on the same subject. It sounded like an intriguing idea, and so we borrowed that title to use as our own personal writing prompt in preparation for the next meeting. As any writer will tell you, it’s almost impossible to fall asleep at night after your creative impulse has been sparked in such a way. While lying awake, my thoughts ricocheted from one idea to another: The “empty box” became an “empty shoe box” in my mind, which made me wonder what kind of shoes might have been stored in it. (I immediately visualized a pair of glass slippers, suppressing a giggle so as not to wake my husband.) Glass slippers, of course, led me to think of a “prince” and the possibility of “wedding gifts” in his future, which looped back to not just one empty box, but lots and lots of them! Why were they all empty? I knew I had to get out of bed and jot down an answer before I could get any rest, and so I did. The next day my original fairytale practically wrote itself.

Similarly, our group left another meeting with a “prompt” that consisted of the following ten words that we were to use in a writing exercise: kit, bodega, pennywhistle, witless, tuatara, quarter notes, retainer, culinary, cottage pudding, and cilantro–all seemingly unrelated. True, but not for long! I lay awake “mulling” them over until they swam into place for me like synchronized swimmers who knew exactly where they belonged before the performance started, before it—the story—was even choreographed, or written down, as the case may be. As with my first example of wordplay, I ended up with another quirky tale that seemed to flow from my pen without any effort when I sat at my desk to write it the next morning.  Maybe you should give those words a try yourself–have fun!  (You don’t have to come up with a children’s story; they’ll work just in well in adult stories or poetry.)

As many of you know, creative writing can be both exhilarating and painstakingly hard work at the same time. As long as “playing with words” is something that both children and adults enjoy in the process of freeing their imaginations, I believe it’s the perfect heading for this post. Words should leap, tumble, flow, rain down, plod, scatter, tremble or whatever else you would have them do on a page; most of all, they should come alive for your readers and be shared. Click on A Reader’s Library page on my menu tab above for two more book recommendations that I guarantee will expand your vocabulary. One of them is truly inspirational!

Created new Menu Page under identical title, Playing with Words; the content of the page is the same as it is in this post.

1 Response to Playing with Words