Fly Me to the Moon (Weekly Photo Challenge: Boundaries) 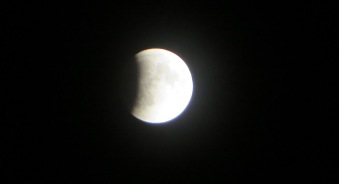 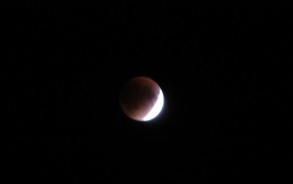 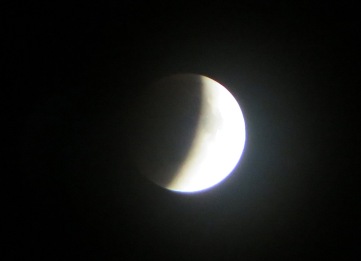 When I was a child, I would look up at the night sky and imagine myself to be in the company of Peter Pan, Wendy, John and Michael, escaping to Neverland with arms outstretched, as if flying were the most natural form of transportation in the world. After several trial flights off the edge of a barn loft into a pile of hay, I had to accept reality. There have been times in my life, though, when I experienced “flying dreams”–ones in which I felt detached from my physical body, yet was fully aware that I was soaring above the earth, elated by my freedom, no longer bound by the limits of space and time. Even upon waking, the feelings associated with being at peace and in a state of wonder would remain with me long afterwards. While watching the lunar eclipse on September 27, 2015, I marvelled, again, at nature’s awesome display.  As I watched the moon pass through earth’s shadow–our home planet temporarily blocking the rays of the sun–the moonscape took on a mysterious blood red glow. Lovely!  These are a few of the photos I took that night from our deck in the city.

4 Responses to Fly Me to the Moon (Weekly Photo Challenge: Boundaries)