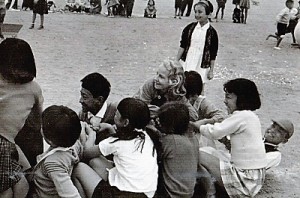 Participating in a tug-of-war with my Japanese playmates.

As someone who frequently needs to be torn away from my laptop or iPad at all hours of the day and night, I’ve been thinking back to my “life before screens” childhood, and wondering if kids today are getting enough playtime of the non-video game variety. TVs were readily available and in many homes at the time, but my parents chose not to have one. Did I have any less fun than friends with screens? I don’t think so. With so much time to fill after finishing my daily assignments (correspondence courses provided by the Ontario Dept. of Education), reading and physical activities that called on the use of my imagination became a big part my life.

For example, the characters in many of the books I read as a young girl, such as Louisa May Alcott’s Jo and L.M. Montgomery’s Emily, not only sparked my desire to write, but also influenced the types of games I created for entertainment when I was a child. If you were to go back in time and choose any one of my treasured books from a shelf, you would find a neatly cut, half-envelope glued inside the back cover. There would be a lined card protruding from it, one upon which I’d recorded the exact dates the item had been checked in and out at the “front desk”. I even went so far as to prepare my parents’ detective novels for circulation, in addition to altering their “important” non-fiction titles, much to their chagrin.

Of course, it takes two to play this game, and my sister, who shares my fondness for books, was a willing participant. It’s not surprising that as adults, we both chose to work full-time in libraries—an ideal place of employment for anyone possessing an insatiable curiosity about the world and the universe we inhabit. (In another imagined scenario with the uninspired name of “playing restaurant”, I used to make and serve real Waldorf Salad, but did I ever want to become a chef? Not for a minute!)

On a slightly different note, I still remember a day from my childhood when my sister and

I spontaneously created a new form of entertainment to amuse ourselves. We were curled up with a book at the opposite ends of a sofa. I don’t know what got us started, but we began to take turns at reading a sentence aloud from the page we each had open before us. The results were belly aching hilarious at times, or even uncanny in the way the sentences would sometimes relate to one another, so much so that a totally different plot from those of the original texts would sometimes develop like invisible ink becoming visible on a page. You could say we’d been “playing with words”—the words of published authors. (Whether those authors would have approved of that, or not, is another matter!)

Looking back on those years, I’m grateful that the home environment of my childhood encouraged creative play and the development of my imagination. To read about how my mind responds to the challenge of creating stories from word prompts, click the Playing with Words tab on the Menu above, or click here: https://peggypilkey.ca/playing-with-words/ Thanks for reading!

2 Responses to Life Before Screens