Undoukai, Field Day: Yuri-chan and I join a tug-of-war team.

“Friendship is born at that moment when one person says to another: “What! You too? I thought I was the only one.”
― C.S. Lewis

“Third culture kid” (TCK) is a sociological term coined by Ruth Useem in the 1950s, a phrase that didn’t come into wider use until 1999 with the publication of The Third Culture Kid Experience: Growing up Among Worlds by Ruth E. Van Reken and David C. Pollock. Today, “cross-cultural kid” (CCK) is considered a more inclusive term in that it may include personal attributes held in common by TCKs, refugees, immigrants, and others. I wondered, recently, whether the experiences of today’s cross-cultural kids differ from those of my generation, who had no social media avenues to bridge the distance between themselves and the friends in the countries in which they grew up, or to which they moved for post-secondary education. I have since acquired the 3rd edition of this book, and have learned that although social media has made it easier for TCKs to keep in touch, it has also created its own set of problems, perhaps even delaying a returnee’s efforts to pursue new friendships upon resettlement in the parents’ passport country. The following definition of a “third culture kid” is one that is still widely used today:

“A Third Culture Kid (TCK) is a person who has spent a significant part of his or her development years outside the parents’ culture. The TCK builds relationships to all of the cultures, while not having full ownership in any. Although elements from each culture are assimilated into the TCK’s life experience, the sense of belonging is in relationship to others of similar background.” — The Third Culture Kid Experience: Growing Up Among Worlds / David C. Pollock and Ruth E. Van Reken : Intercultural Press, Inc., c1999. (3rd edition, Nicholas Brealey Publishing © David C. Pollock, Ruth E. Van Reken and Michael V. Pollock 2017)

The “third culture” described here is a virtual one, located solely in the minds of its citizens. It exists wherever the paths of people of varied backgrounds and nationalities cross and who, for whatever reason, discover they have an instant connection with one another simply because they share the common experience of having lived their formative years away from their parents’ homeland. While living in a foreign country of their parents’ choosing, they and their expatriate friends unknowingly become part of a “third culture” with others sharing similar circumstances. At the same time, this culture they belong to is only one small satellite of a worldwide phenomenon.

For example, a teen who has a parent working for an embassy in Ottawa, would likely grow up attending local schools and sharing a Canadian lifestyle with friends and classmates living in her neighbourhood. Near the end of the diplomat’s contract, the family may talk frequently about returning “home”. But when she actually arrives there, the teen no longer feels a part of her parents’ culture, nor does she feel completely Canadian. She has become a “third culture kid”. It’s possible that the two of us, if we were to meet today, would discover that we have more in common with each other’s emotional landscape than not, even though I was born here in Canada and she was born, say, in India. TCKs and adult TCKs often wonder where they truly belong, or if they do, indeed, belong anywhere.

My own TCK/CCK experience may be depicted as two overlapping circles–my parents’ culture–Canada, and the host culture–Japan. The shaded part where they overlap represents a set of characteristics that I once held in common with many other “third culture kids” returning “home”. Not long ago, it 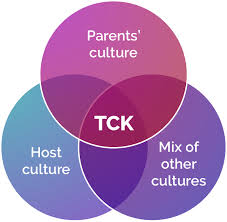 occurred to me that I have a third overlapping one–a culture within a culture–a distinct community of English speaking people who once shared the campus life of an international school within a foreign setting. This falls into the circle labelled “mix of other cultures”. Between the ages of nine and thirteen, I lived with my parents and sister in Tokushima City on Shikoku Island. Japanese became the language my sister and I spoke most often, not only while playing with kids in our neighbourhood, but also between ourselves at home. Because of this immersive experience, when I went to high school in Kobe and lived in residence, I was able to move seamlessly back and forth between the circles of campus life and the city.

Upon my return to Canada and without the benefits of today’s instant means of communication, I felt completely cut-off from my past. The places that I missed dearly included Tokushima, where I was home-schooled for four years, and where I became bilingual; Kobe, a bustling, cosmopolitan port city, where panoramic views of the harbour from classroom windows contributed to my love of the sea; and Lake Nojiri, where I’d spent my summers at the family cottage.

At that time, there was no one word or words to describe the deep sense of loss I was experiencing upon my return; the country I’d always thought about and talked about as “home” when I lived in Japan, no longer felt that way to me. My thoughts were often drawn to Japan, where I’d spent the last half of my eighteen-year-old-life–my “formative years.” The question I always dreaded being asked was “Where are you from?” because I had no idea what to say. My answer would often end up being long and rambling, not to mention boring to the person who’d asked it. It wasn’t until the late 1990s that I first heard the terms “transnational”, “third culture kid” (TCK), “global nomad”, and “cross-cultural kid” (CCK).  I suddenly had a word-rack on which to hang all those mixed-up emotions, which meant I didn’t have to carry them around any more. I could finally let go. Lately, “transcultural”, “hidden immigrant” and “third culture individual” are phrases that have evolved in our language to perhaps give us adults a little more dignity by removing the reference to “kid” or “kids” altogether from the terms “adult third culture kid” (ATCK) or “adult cross-cultural kids” (ACCKs), of whom the most famous might be former U.S. President Barack Obama. (Citation: Merriam-Webster Dictionary)

Christmas vacation in the Rupununi with CUSO friends, Bill and Heather Gardam and Wes and Selma Berg. We found a seven-foot frypan in the Amerindian kitchen hut on our hike to Moca-Moca Falls.

When a TCK puts down roots, such as when one establishes a career and/or family, he or she may self-identify as an “adult third culture kid”. And although the feeling of being “at home” deepens, a strange sensation of dislocation may arise from time to time, reminding the person of her other culture–a suppressed or buried part of her identity, perhaps revealed and celebrated briefly, but often relegated for years on end to the locked trunk of her mind. Indeed, sometimes it takes a period of living abroad in another, completely different culture (as in my own case, Caribbean and South American), for TCKs to fully realize–upon their latest return–that their parents’ country of origin has once again become their true home.

Recently, someone in a reply to my blog used the word “saudade”, one that I was unfamiliar with, in relation to the inexpressible feelings we sometimes experience as adult “third culture kids”.  Here are two explanations for this word that I found during an online search:

“The famous saudade [my italics] of the Portuguese is a vague and constant desire for something that does not and probably cannot exist, for something other than the present, a turning towards the past or towards the future; not an active discontent or poignant sadness but an indolent dreaming wistfulness.” (Bell, AFG. In Portugal, 1912)

“Saudade: A Portuguese word for a feeling, or longing for something, or some event that one is fond of, which is gone, but might return in a distant future…often carries a fatalistic tone and repressed knowledge that the object of longing may never return.”  (Wikipedia)

“Third culture kid” (TCK) is a term interchangeable today with “cross-cultural kid” (CCK), but many other phrases related to these two include the following:”adult cross-cultural kid” (ACCK) ; “adult third culture kid” (ATCK), “third culture individual” (TCI), “global nomad”, and “hidden immigrant”. In case anyone would like to learn more about this topic, here are links to several websites/blogs that I’ve visited recently: https://communicatingacrossboundariesblog.com/tck-resources/blogs/; http:/crossculturalkid.org ; http://denizenmag.com ; http://thedisplacednation.com ; http://www.tckworld.com ;
https://en.wikipedia.org/wik ; http://thirdcultureliterature.blogspot.ca/2014/07/an-ever-growing-list-of-third-culture.html ; https://www.facebook.com/TCKWorldwide/