My Life in Japan

Japan–the country in which I’d spent my formative years (ages eight to eighteen)–will always be close to my heart, although decades have passed since I returned home to Canada to begin a new “chapter” in my life.  I may reminisce about those years on this page, or touch upon my experiences of travelling to and from Kobe via passenger liner or freighter. I’m sure if I open the old steamer trunk in the basement–first used by my parents in the late 1930s–I’ll find my next writing prompt among the treasures stored there. Do you want to know what’s in it? Check back soon. (To find out, see my entry below for March 24, 2013)

I thought I’d update this page today with a postcard of the S.S. President Wilson, the ship my family sailed on from San Francisco to Kobe, via Hawaii, in 1952. I have three particular memories associated with this voyage. 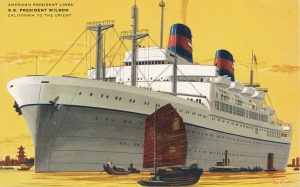 First, I remember that many of us became seasick soon after we had embarked, and that my dad used the power of suggestion (or psychological manipulation!) to help me get better quickly by promising that I could attend a movie in the ship’s theatre that evening if I was well enough to go. It worked! I remember, too, that meal times were exciting for me because for the first time in my young life, I was invited to choose what I would like to eat from several options provided on a menu; everyday I would ask for the same breakfast: Rice Krispies topped with sliced bananas and doused with real cream. Another memory is of a playroom where children could go for supervised activities. 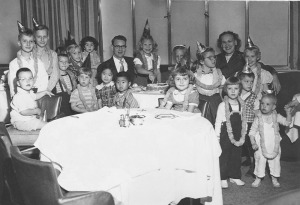 I believe that’s where I first met the girl who became my best friend during the voyage.  In an unusual case of serendipity, Carolyn and I reconnected approximately twenty-five years after we had last crossed paths at Lake Nojiri in Japan–the lake where our families spent the summer holidays and where we hung out with all the other teens who were staying at the cottages.

What was the likelihood that we would meet again, in Halifax, Nova Scotia, on the far side of the continent from where we’d first met as children, and that a photo of world-renowned slide guitarist Ellen McIlwaine in a local newspaper ad would be instrumental in reuniting the three of us? Like Carolyn and me, Ellen had vacationed at the same lake. Knowing that their families were from the United States–as were many of my high school friends at the time–I thought our final goodbyes were just that…final! 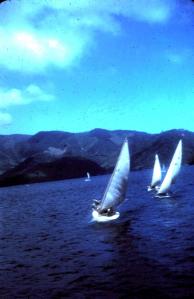 Needless to say, I couldn’t contain my excitement when the three of us met at the venue where Ellen was playing. We were able to share our “third culture kid” experiences with each other and reminisce about Japan. I believe our husbands and friends were just as astonished as we were by this quickly arranged reunion. This time, when we all went our separate ways, Carolyn and I knew we would be able to see each other again whenever we liked, since our families had been living within a half hour of each other for the previous two and a half decades.  Ellen, too, has returned to Halifax several times since then, and we always try to get together at least once during her busy schedule.  Believe it or not, that’s only one of several “It’s a Small World” stories I could tell!

Unopened steamer trunk (Stickers on surface include those of P&O-Orient Lines, N..Y.K. Line and Cunard.)

“Do you want to know what’s in it?” This rhetorical question about my trunk  in the basement took me approximately five weeks to answer, being the procrastinator that I am.  No doubt I was postponing this task because I first needed to haul it out of the tight space it was in so that I could open it. Once its lid was raised, I decided to take a few photographs of the contents. In addition to what you see below, I found several folding fans, furoshiki, obi, sashes, gifts and other souvenirs–such as hand-painted papyrus from Mexico, and glazed figures made of clay from Korea. 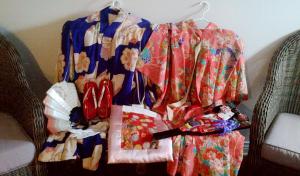 In the center of the photo to the right of this paragraph is a small, handsewn doll’s futon set given to me by one of our neighbours in Tokushima.  I remember tucking the smallest of my dolls between the top and bottom layers for her hirune–afternoon nap–but her head was still too large for that tiny pillow!  Still, it was one of my favourite possessions. I wore the pink kimono for my lessons in traditional Japanese dance–odori–while the other, I received as a farewell gift from the mother of a close friend. Both silk kimonos were stitched by hand.

The fan is one I used during my dance routines, and the white tabi are like socks made of cotten fabric that rise just above the ankle, only the big toe is separated from its neighbours, making it possible to slip the thongs of the wooden, red lacquered footwear in between.

In the close-up photo beside this text and to the right of the picture, is one of two ornate bats that my sister and I would play with on New Year’s Day.  She and I would hit a shuttlecock back and forth between us using the flat side of each, much like hitting a “birdie” in a game of badminton, only without the presence of a dividing net between us.