This page/post is not about a newly discovered Jane Austen manuscript à la Pride and Prejudice or Sense and Sensibility, but speaks to the few insights I’ve gained during the course of submitting manuscripts to publishers for consideration. Since I’ve always disliked taking the necessary steps to do that, my submissions have been very few and far between—and here I’m not only speaking in terms of weeks or months, but years. The process is often lengthy, requiring  patience and, ultimately, persistence, for rarely do writers meet the precise requirements spelled out in an editor’s or agent’s wish list each and every time a manuscript lands in her slush pile or on her desk. As both published and unpublished writers already know, learning about the process of creative writing is a life-long venture. In my own case, I’ll always need to be reminded of the essential elements of this craft, whether I pursue this through my personal choice of reading (fiction and non-fiction), or the workshops and courses I choose to attend. 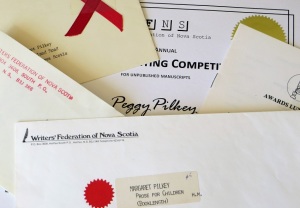 Every word of praise and constructive criticism may help you hone your craft. Enter local, provincial (state), regional and national contests as often as possible.

If you are here on this page, perhaps you already belong to one or more writers’ groups–safe havens where members share the same or similar goals as they seek to improve their writing skills. Part of this sharing may involve laughter or tears, for manuscript rejections from agents and editors are far, far more common than are acceptances. Even our published friends will tell us that having a best-selling book does not always guarantee that future manuscripts will find a home.  So let’s get the topic of rejection out of the way by dealing with it first…

The Truth Be Told:

“Most manuscripts are rejected because they’re just plain bad.  The stories are trite, the characters wooden, the endings predictable.  The plots may smack of didacticism or patronize the young reader…. One more point: General fiction is the most competitive genre in any age group of children’s books. It’s also the most subjective, meaning your manuscript has to appeal to exactly the right editor.”–Laura Backes, founder and editor of “The Children’s Book Insider“.

Yet don’t despair.  You may be an excellent writer with a great story, and there could be any number of reasons that it was rejected, such as the publisher has just recently published a book on the same or similar topic.  There are two types of rejection letters one may receive in response to a submission—the form letter (one signed by an administrative assistant of an editor or publisher and stuffed into a SASE—a writer’s “self-addressed, stamped envelope” before being tossed into the office “outbox”) or, a personal handwritten or typed note signed by an editor giving short, but specific feedback with specific reference to your manuscript.

We often talk about the latter category as “good rejects”–an oxymoron in the view of most people–yet it’s the “good rejects” that keep many of us writing and hoping for that break-through publication. A more likely than not scenario these days is that you will be sent an automated, computer-generated reply that indicates a submission was received, and “if you don’t hear back from us within six to nine months, please assume we’re taking a pass on your manuscript for publication” … I’m thankful that I’ve received enough “good rejects” to keep me writing, for I can’t imagine going through life not spending at least some of the time doing the one activity I enjoy most. If you are new to the submission process, you must understand that guidelines for writers posted on publishers’ websites are there for a reason. Always, always check there first before sending out that query letter or manuscript.

It’s no secret that the late Madeleine L’Engle’s A Wrinkle in Time received twenty-six rejections before it was finally accepted for publication, or that J.K. Rowling’s first Harry Potter novel–Harry Potter and the Philosopher’s Stone–was turned down a dozen times before it found a home with Bloomsbury Press. There are many other examples of well-known authors such as John Grisham, Stephen King, Dr. Seuss and Frank Herbert who all had to endure endless submission/rejection cycles before seeing their books in print. What each of them possessed in common with the others was first, an undying belief in the worthiness of their writing projects, and second, their ability to persist in their efforts to find a publisher in spite of repeated rejections.

As Laura Backes suggested in the above quotation, it’s wise to remember that the evaluation of a piece of writing is often subjective on the part of the reader. For example, a literary agent noted that a particular chapter in one of my novels was “pitch-perfect”, and she’d liked the way I’d introduced the future significance of a particular male character. She suggested I rewrite the beginning chapters to be as tightly constructed as that one. A contest judge, on the other hand, who had evaluated this novel prior to my agency submission, suggested that the character I had developed further in it was unnecessary to the storyline, and that I should remove him altogether. And then a third reader–a paid freelance editor–wondered why that same chapter was even there; she thought I should cut it from the manuscript in its entirety. This difference of opinion is not unusual, and so in the end, a writer has to weigh all the praise and criticism provided by others, and then revise the manuscript according to his or her own gut feeling of what would make it stronger.

Thanks for the Compliment…Oops; I Mean Criticism:

Sometimes a reader may compare your work to that of a well-known author, but not in the way you might hope.  Here is an example of a critique provided by a contest judge: “As with some of A.A. Milne’s humour with language, young children miss the point.” How should I interpret this comment? Is this person comparing me with one of my favourite authors? Wow! I don’t remember missing the point when, as a child, I read Winnie-the-Pooh, The House at Pooh Corner or Now We Are Six. I don’t believe I did, but if a child “misses the point”, does it really matter?  Are not word play, rhythm and imagery all equally relevant to one’s learning experience and enjoyment of language?

Finally, let me add an example of positive feedback: “The ‘Silly Sea Songs’ remind me of Dennis Lee’s work for children: they are funny, playful, and ‘hang together’…” Thank you! I’ve also been told that my children’s nonsense poems remind the listener of those written by Sheree Fitch. Nice. Now, if only an editor would see them that way! The fact that I’ve submitted my collection of children’s poetry only twice–ever–may explain why I have a mere two rejection letters to prove my interest in finding a publisher. Sigh. It’s true that in order to publish, you must submit!!!  But you must first choose your target carefully. The standard wait time for a response is now six to nine months, so one has to wonder if writing for publication is worth the time and effort. If one is truly a writer, then one cannot help but answer “yes”.

Self-Publishing–To Do or Not to Do–That is the Question:

The authors of Chicken Soup for the Soul received 134 rejections before they decided to self-publish.  (Confession: I’ve only read the first one of their hugely popular series.)  Similarly, Beatrix Potter had so much trouble trying to get The Tale of Peter Rabbit accepted by an editor, she printed copies for her own family before it was picked up by Frederick Warne.  The publisher advised her to do her sketches in colour, rather than black and white, and obviously that was a good move! So if you’ve only approached two or three companies before giving up on the idea of seeing your name in print, keep submitting…or maybe it’s time to consider one of several options available to you today. If you do decide to self-publish, be sure you have an independent editor go through your manuscript first. To find the best resources on self-publishing and e-book publication, click on the link to Jane Friedman’s blog located on the right of the screen. She’s an expert on just about everything to do with the world of digital publishing and marketing, and often invites well-known authors, editors, agents, marketers and others to write guest posts on her blog.

I found a number of quotations online, recently, concerning author rejection letters and well…they made me laugh. (Now you know I have a warped sense of humour!)

My favourite one was addressed to Samuel Johnson (the source didn’t know which book the editor was referring to): “Your manuscript is both good and original; but the part that is good is not original, and the part that is original is not good.”

To Stephen King, re: Carrie: “We are not interested in science fiction which deals with negative utopias. They do not sell.” [Negative utopias?!]

To F. Scott Fitzgerald, re: The Great Gatsby: “You’d have a decent book if you’d get rid of that Gatsby character.”