Ocean Liners, Then and Now 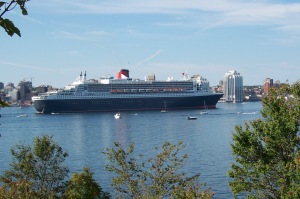 Having mentioned a couple of ships in my blog to date (on my Family Memoirs and My Life in Japan pages), I was curious to know how the gross registered tonnage (GRT) of the older ships my family travelled on compared with the GRTs of those I’ve observed entering Halifax Harbour in recent years. In the ’50s and ’60s, the former seemed both large and luxurious to me. Now when I observe cruise ships arriving to dock, I wonder why I ever thought the vessels I list below were so grand and magnificent.  (But that’s how I remember all but one of them!)

S.S. President Wilson: 15,359 GRT; San Francisco to Yokohama via Hawaii (Nov. 1952) (For an image, see my postcard displayed on my My Life in Japan page in the Menu tab above.)

SS China Mail: 8,616 GRT diesel freighter; Seattle to Japan via the coast of B.C. and Alaska. (August 1958) I’m not sure if this information applies to the ship my family travelled on; I was unable to find any reference suggesting that it had made crossings of the Pacific Ocean in the late 1950s.  When I first laid eyes on The China Mail, it looked small, even for a freighter, and my parents, sister and I boarded with great trepidation.  We encountered a couple of severe storms on our northern Pacific crossing, making it the least favourite of our voyages.

RMS Oronsay
(Postcard from the private collection of Reuben Goosens, author of http://www.ssmaritime.com)

A memoir written about this same voyage can be found at www.ssmaritime.com//ssOronsay_4.htm. The author, Rick Delaney, had been a thirteen year old passenger at the time. Reading through it triggered my own wonderful memories, as he described many of the same places and events my family had experienced, including a two hour bus trip through the desert to Cairo where we toured the Museum as well as the site of the pyramids before meeting up with the ship again in Port Said.  Another good read that carried me back to those days was Michael Ondaatje’s novel, The Cat’s Table.  As a young boy in 1954, the author had traveled from Sri Lanka to Tilbury, England on the Oronsay, without adult accompaniment. In the novel he gives this ship “an imagined rendering” as the setting for his fictional tale of eleven-year old Mynah and his friends.

RMS Carinthia (1956) Cunard Line: 21,800 GRT; Liverpool, England to Montreal, Canada. (August 1962)  As soon as we boarded, my parents, sister and I were required to visit the health clinic to be examined for smallpox symptoms because it had come to the authorities attention that a child on the Oronsay (the P&O liner from which we’d disembarked a week earlier) had developed the disease.  I can’t imagine how they were able to trace the whereabouts of all the passengers from that particular voyage, or if it had even been possible. 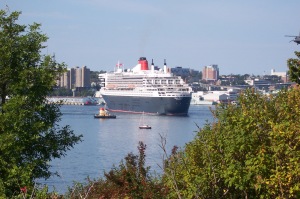 Now if I compare the gross registered tonnage (GRT) of the largest ship I travelled on–The P&O Oronsay at approximately 28,000 GRT–with the Queen Mary 2 at 148,428 GRT, I find the difference mind-boggling.  Other sea-going vessels constructed since 2004, including MS Freedom of the Seas (Royal Caribbean International), have already surpassed the Queen Mary 2 in sheer size.  Would I ever want to travel on one of them?  I’m not so sure.  Many of the multi-decked ones look taller than a high rise building and top heavy, to boot, as if they could easily roll over in heavy seas!

3 Responses to Ocean Liners, Then and Now